By Ms. Garlic - October 21, 2012
This weekend we headed down to NYC for a quick trip. Our friend Jacqui, co-owner of a wine bar we loved when we lived there Rest-au-Rant, is moving back to Berlin forever, and there was a farewell party for her. We felt that Jacqui herself and that particular establishment at a certain point in time was really important in our lives, so it seemed right to say good-bye. We had the Spanish sausage for an appetizer that was oven-roasted in red wine sauce and spices. It was fabulous. See full menu here. We had a couple paninis for old time sake too, because we always used to get them years ago. 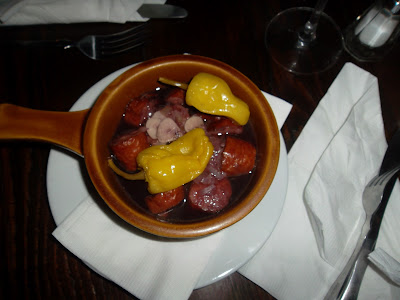 It was great being able to say good-bye to our friend, and another friend of ours, Megan, showed up. She's from Scotia, and of course in a Smallbany moment knows my friend Elizabeth who I met in a totally different way. A couple other people there were from the Capital Region. One talked about how much cheaper it would be to raise her kid if she moved back here near her parents, and another former Capital Region resident went on and on about how much the Tech jobs around here are going to boost the economy in the future. Small, small world.

Then we embarked on a part of the evening where we felt like we were Tina Fey and Steve Carell in the movie "Date Night". We got on an F train that became a D train in the middle of the Lower East Side where everyone knows it is difficult to get anywhere from late at night on the weekend. We tried to hail cabs who would just refuse to take us to Brooklyn (I think that is illegal). They'd just shake their heads and drive off. Really nice. We finally found another F train, and got where we were staying - but the point remains that to take a train from Queens to Brooklyn on a Saturday night takes almost as long as it does to take a train from Albany to NYC. There was a girl on the train who said "What is the point of paying if it never runs properly?" And at that point along with a discussion of how much better our grocery stores are up here, we took a moment to appreciate what we have now.

This morning we went to Char No. 4 with our friend Lindsay. Can I just say they have bourbon Bloody Marys - enough said there? They make their own sausage, pickles, biscuits, and it is all delicious. We always seem to go there for brunch when we are in Brooklyn, and it is hard to beat. We also like One Girl Cookies. I got an assortment of cookies, my favorite probably being the chocolate shortbread with a mocha filling. Scott got some chocolate and pumpkin whoopie pies. They are fabulous with their delicious cream cheese filling. 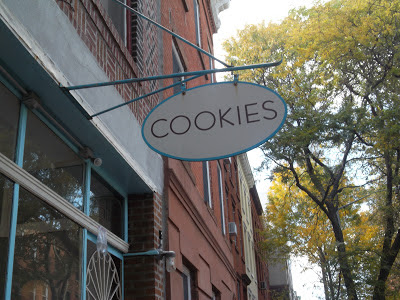 On our way out we met some more people at Floyd in Brooklyn Heights. It has an indoor bocce court and big comfy chairs. I had Bluepoint Pumpkin Ale and really enjoyed it.They always seem to have a rockin- party around the Kentucky Derby.

We had a fun trip! It was nice to pop in and see the sites (and by that I mostly mean friends, beer, and cookies).