By Ms. Garlic - July 14, 2017
This past spring I went to Germany for the first time on a work trip. It felt good to see some world, the arts people we were working with were incredibly hospitable, and I left with a warm impression of the German people in general (despite pretty much constant reminders of certain grim parts of their history in the forms of monuments and memorials all around the city, which I wasn't sure how to deal with). I also don't know a lick of German, which was fine because the German people often know English, but the Turkish people only know German so at some Turkish restaurants and second hand shops I had to resort to awkward gestures, which was all in all makes one appreciate what it is to be a foreigner in any land - a foreigner in this country for instance. It's certainly not easy.

Anyways, on the way back I unexpectedly got stuck in Paris for a night. It's hard to explain what a natural and easy connection I have with French culture/food/language. Part of it might be that I had been there before, that I took French for six years in school (even though I am rusty I still understand basic questions, signs and menus), that I had ancestors who were French noble people who bought a large portion of the island of Manhattan hundreds of years ago before deciding it was a bad investment (haha) and went back to France. Who knows, but there is something that clicks that I just cannot explain, and I have never noticed it so strongly as when I left Berlin and went to Paris. There's a reason I picked French over German all those years ago in school it seems. I could go on and on about how much I loved the Air France flight home -  the wine, the fact they gave us an adorable menu, the pastries, the in flight entertainment options showing French gardens and castles in travel videos, the safety videos telling you it was chic to wear your seat belt because it accentuates your waist, the stylish, classy flight attendants who were snacking on goat cheese, the fact that they left sparkling wine out in a serve yourself station with some camembert (naturally as one does). But I am not going to go on and on about that because I want to talk about this restaurant, but the point is I swoon for all things French.

Chez Nous in Schenectady is a great French restaurant, that I think has probably only been open about a couple of years.  We first went there last year for my husband's birthday, and we've been back a few times since. It's a great place to take out of town visitors I think because it has a unique look and feel, and the food has always been great. I bought my husband a gift certificate as an anniversary gift, and it turned out to be a great choice.

They have several different seating areas - a patio, a garden dining room that has a lot of windows and is decorated in blues and greens, the main seating area which has these extraordinarily comfortable wingback chairs, benchs, toile throw pillows and some very pretty landscape and still life paintings.

They have great wines by the glass (I've never had one I was disappointed with ordering - last night I had a fabulous Cabernet Franc Rose) and delicious, thoughtfully composed cocktails. They also offer complementary sparkling water by the glass, which is great perk. The food is all really fresh and inspired. I don't often order desserts in restaurants, but I almost always want dessert here.

I did the Prix Fixe last night. I had the vichyssoise, the beef bourguignon, and the creme brulee. Every element of the meal was really great. The vichysoisse is just really refreshing on a hot summer's evening, and the beef bourguignon really makes you feel at home wherever you are. It's like the idea of home in a bowl. And Scott called the creme brulee possibly the best he had ever had - it had a great carmelized crust on top, and the flavor of the custard was just lovely. 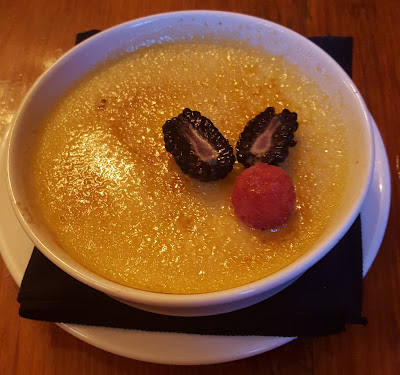 My husband discovered Instagram for the first time last night, and it was a bit like the first time he got his first cell phone a decade ago. So over there he has featured his French Onion soup (it was just a tiny bit sweet and had a whole lot of deep savory flavors - and everything Frenh Onion soup is supposed to be), and his sirloin which was perfectly cooked and had a nice medley of baby vegetables including some you don't always see everywhere I think like patty pan squash.

Anyway, it's not super cheap, although they do have a bar menu we've never tried, and the $39 three course mid week prix fixe is a good deal for all the delicious food you get for it. But I think for birthdays, anniversaries, or for showing around people from out of town, and the like this is an excellent choice. Every time I make my way out the door I already can't wait to go back.