Showing posts from 2017
Show all

This past spring I went to Germany for the first time on a work trip. It felt good to see some world, the arts people we were working with were incredibly hospitable, and I left with a warm impression of the German people in general (despite pretty much constant reminders of certain grim parts of their history in the forms of monuments and memorials all around the city, which I wasn't sure how to deal with). I also don't know a lick of German, which was fine because the German people often know English, but the Turkish people only know German so at some Turkish restaurants and second hand shops I had to resort to awkward gestures, which was all in all makes one appreciate what it is to be a foreigner in any land - a foreigner in this country for instance. It's certainly not easy. Anyways, on the way back I unexpectedly got stuck in Paris for a night. It's hard to explain what a natural and easy connection I have with French culture/food/language. Part of it might be t
4 comments
Read more 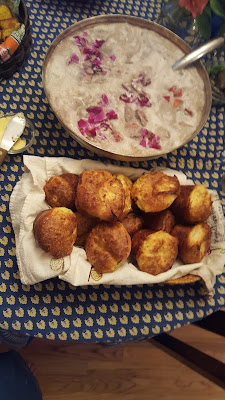 Its hard to believe, I have been having salad bar parties for five years! Here's the link back to the post of the first one . You can see my punch was a bit more attractive for that party. The idea is everyone brings an ingredient to add to the salad bar, and then everyone can go down the line and even make several very different salads. It ends up feeling interactive and community building, I think. This is a tradition I've been really happy to keep going because I feel like it was a really great idea to start off with. It doesn't require much cooking which is great for summer months, sometimes people have extra produce in the summer from their gardens or CSA memberships, and its really healthy and refreshing so it just feels perfect for this time of year. I thought I'd break it down how this year went. Alright, so first on this punch... uh what can I say, everyone thought it was like a science experiment. Started out with Joy the Baker's Lavender Lemonade
Post a Comment
Read more
More posts