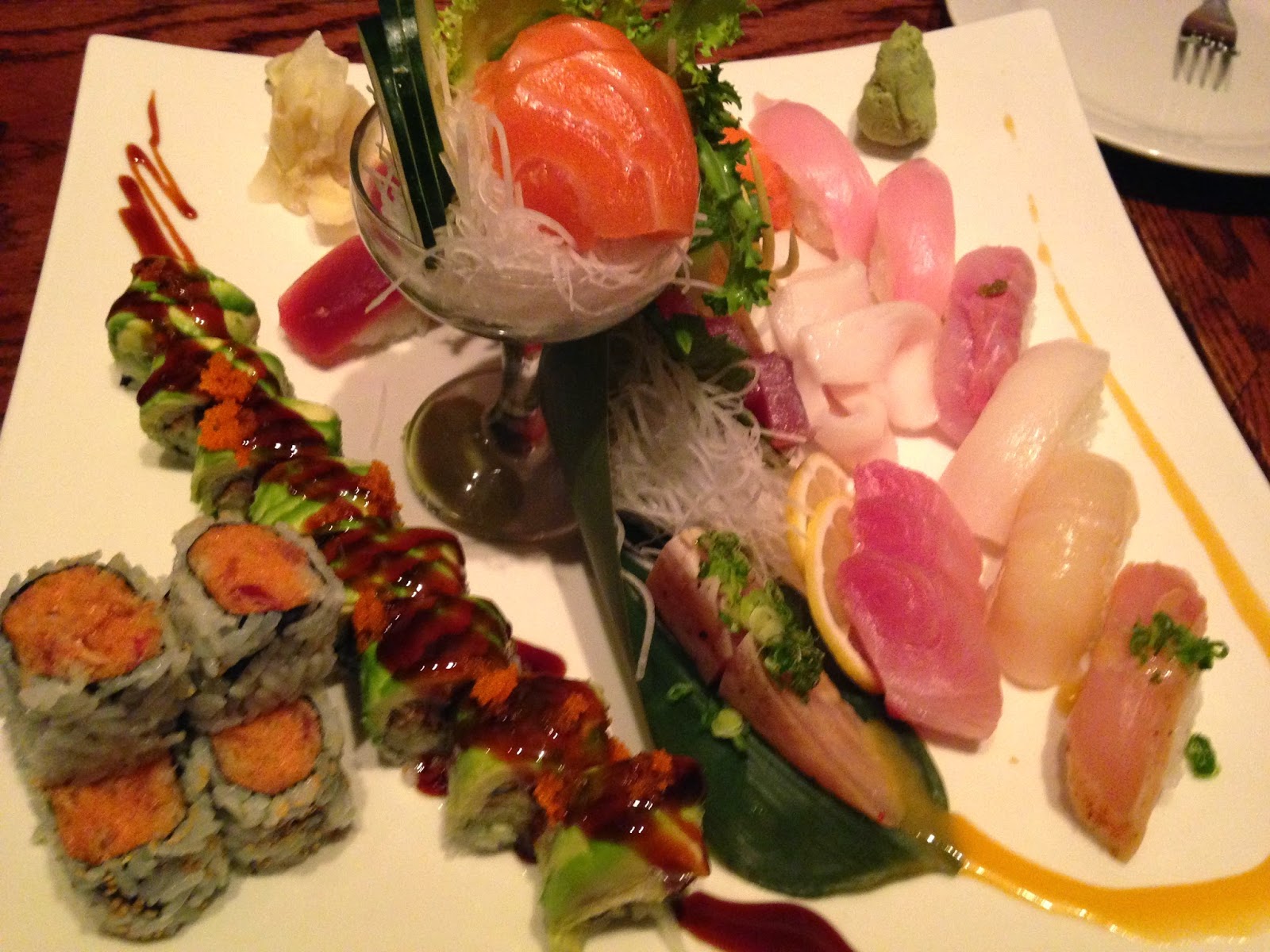 A couple years ago I read Rules of Civility by Amor Towles over the holidays and somehow got this idea that New Year's Eve meant trolling through a Jazz Bar in a seedy corner of 1930s Manhattan about to make so many different choices that will profoundly effect one's life for all the years to come, preferably wearing pearls and silk and drinking champagne. Well, there times in life when your choices are made gradually and flow like a river into other choices, and sometimes there are no choices to be made at all, except always the choice to continue on one's set path or to alter it ever so slightly in ways you don't even notice yourself until much later. Also, what is actually wrong with pajama pants New Year's Eve?

We went to Tomo in Slingerlands. Its a great place in general, and the staff is always efficient and responsive to questions about the food. The Love Boat consists of 15 pcs sashimi, 10 pcs sushi, served with spicy tuna and dragon roll. I especially enjoyed the salmon and white tuna. We also really love the white tuna tataki cold appetizer which has a sesame sauce so delicious you wish you could just guzzle it down. Also, the owner gave my husband chopstick lessons, which was so sweet of her and adorable to watch.

Next up on the agenda was dancing in the living room to Pitbull and Ne-Yo, drinking cocktails using an amazing mix we mysteriously received in the mail (who sent us the Bittermilk's charred grapefruit tonic?), and repeatedly saying out load: "2015! 2015! Imagine that!"

In the year 2000, I graduated from high school. I also remember when I was 8 years old thinking about the year 2000 as so incredibly far away and a time when I'd be a "grown up".

In the year 2005, I moved to NYC to work in a coffee shop and live with 5 roommates who barely knew English in a colorful Brooklyn neighborhood. It was a life which was decidedly not the Sex and the City fantasy I imagined when I first wanted to move to NYC in the year 2000.

In the year 2010, I started working full-time in arts related jobs and got engaged. This being half a decade ago is especially hard for me to understand.

Now it is 2015. Everything seems to grow from strands of other things. It all makes sense in a way. I do think if I could have a time traveling machine I wouldn't worry so much. I never make New Year's resolutions, but this year its to resist anticipatory anxiety, especially because my time traveling self would probably be quite pleased how I've turned out.