By Ms. Garlic - November 12, 2013
My in-laws bought me a gift certificate to the Arts Center of the Capital Region for Christmas last year, and last week I used the certificate on a cooking class. It was so fun. Have you seen the Dancing Ewe Farm at the Troy Farmer's Market? They usually have a line of admiring onlookers and really attractive looking charcuterie. Dancing Ewe Farm is a farm in Washington County ran by Louisa and Jody Somers. They have 150 sheep , spend part of the year in Italy harvesting olives to make olive oil, and are all around really impressive, laid-back people. The class that I took was about how to make things with ricotta. I personally love ricotta, but I don't ever really know what to do with it.

First, Jody explained to us the whole history of making ricotta in Italy and what it is used for over there (hint: its not globbed into lasagna the way it is here, its more likely to be served with an appetizer plate and some bread slices).

Then, we made a dessert. It was a really delicious ricotta mousse.  Luisa said that she believes the secret to good cooking is using quality ingredients and simple recipes. She said most of the recipes she makes are from her mother in Italy, and that she doesn't change things up too much. The ricotta mousse was so much better than I was expecting, and she topped it with some of the fabulous fig marmalade they sell at the Troy Farmer's Market which had some lemon zest in it. Basically, she just whipped up some Battenkill Creamery heavy cream with some powdered sugar and rum and whipped in a pound of ricotta. So amazing. They also supplied us with wine pairings, which was very thoughtful. You can read the mousse recipe on their website.

Then, we learned how to make gnudi. I watched a Martha Stewart special on it once, but a lot of people didn't know what it was. Gnudi is basically the filling of ravioli made a little firmer, and then made without the pasta on the outside (nude in Italian). We made ours with swiss chard from the Troy Farmer's Market blanched and then chopped up, mixed up with ricotta, an egg, salt and pepper, and flour. You basically want it to be firm but still a little moist and light. Then we all rolled them up into balls that looked like cookies and rolled them in flour. We threw them into a pot that had a drizzle of olive oil in it and salt and you know they are done when they start to float. Then, we made a sauce with butter, salt and pepper, and sage. It was pure heaven. I couldn't believe how easy it was and how impressive it seemed after we made them. All of us in the class stood around with a real sense of accomplishment at the end, staring at our big bowl of gnudi. I said "Can we add basil or garlic?" and Luisa said "No, the flavors are too delicate, keep it exactly the way it is in the recipe." You can read the gnudi recipe on their website. Check them out: 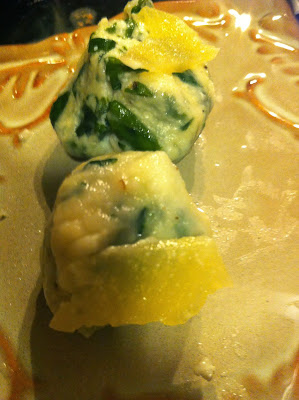 Taking a cooking class is a fun thing to do - you meet new people, you learn new things, and you find that some things are really easy in practice that may seem difficult when you read about them in a cookbook.