By Ms. Garlic - September 11, 2012
My friend Elizabeth said twice on Sunday "if you want to be a food blogger then you have to try Jake Moon at least once." It is a ways out from Albany on the way to Thatcher Park. It is a "destination eatery in the Heldebergs" according to their website. 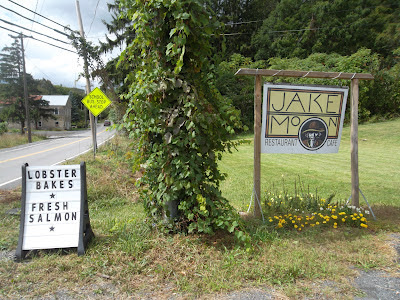 For me, this past weekend was really feeling like the end of summer. We were going to head back out to the Finger Lakes for a special event at the vineyard where we joined the wine club in July (it is Damiani and their reds are fabulous), but thunderstorm warnings caused us to change our plans. I started to realize that my wanting to go back to the Finger Lakes was me wanting to revisit summer vacation just a bit more, and with bad weather it wouldn't have been the same at all. So we stayed back, and when we picked up my friend Elizabeth and her fellow for brunch she was dressed like summer was already over (very sharp looking in tights and boots). I, on the other hand, kept the last pretend bit of summer going with a bright green and white polka dot dress with a white collar and pleated skirt I bought at the flea market in July (imagine that tennis and gin & tonics were combined into a cheerful dress). I have since Sunday converted over to brown tweeds, dark tights, and riding boots, but it was funny for the day for us to be side by side channeling separate seasons. Just two gals and their gentlemen suitors out for a drive in the country and some brunch - what could be better? 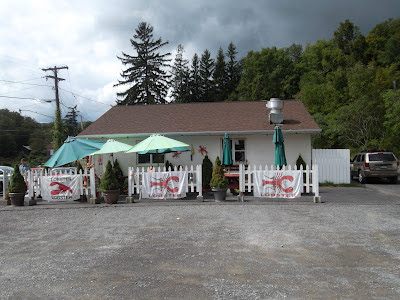 Elizabeth's boyfriend described it as a low key diner in the sticks that just happens to have a real chef. Elizabeth always has said that she likes how they use fresh herbs for seasoning instead of too much salt or grease, and that they try to grow as much as they can on the premises. She also likes that the portions are not so huge that they weigh you down for the rest of the day. It can be difficult to guess which times brunch places will be more or less busy, and it seemed here to attract an early crowd. We arrived around 11 and had to wait for a table, but the place was really clearing out by the time we left. There were bluegrass musicians playing the whole time, and that really added to the ambiance.

The food was so good. It was worth the drive, which was scenic and enjoyable anyway. Elizabeth's gentleman got the "Heldeberg Heaven--Open Faced Monte Cristo with Two Sunny Side Eggs, Salsa, and Guacamole". He really seemed to enjoy it, and so did everyone who tried it. 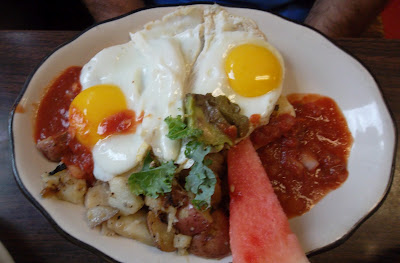 Elizabeth got a special, the Garlic Festival Benedict. It had corn pancakes which I thought were great. She wanted me to mention that they put mint on her watermelon instead of the parsley that was on everyone else's watermelon. She thought this was to better pair with her dish, and she really appreciated the attention to detail. 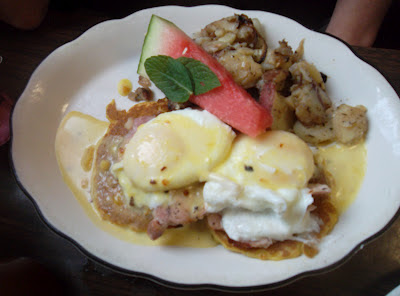 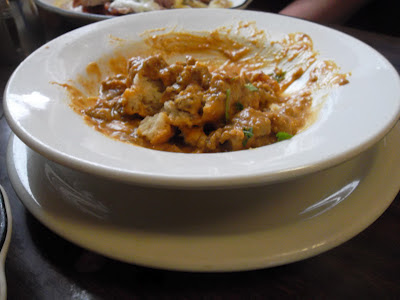 I got the "Bennett Hill Scramble--Wild Mushrooms, Fresh Herbs, and Smoked Gouda", and I loved every bit of it. The eggs were fluffy and not overcooked at all. All the flavors meshed really well together. I also got the onion dill homemade bread, and it was delicious. 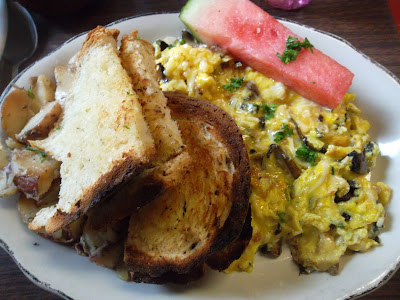 Scott got a special, the caprese omelette since he was figuring tomatoes would not be in season too much longer. He also got the multigrain homemade bread which was equally as great as the onion dill. Even though it is such a simple recipe, this was a great omelette. It is hard to beat fresh ingredients that are simply prepared. 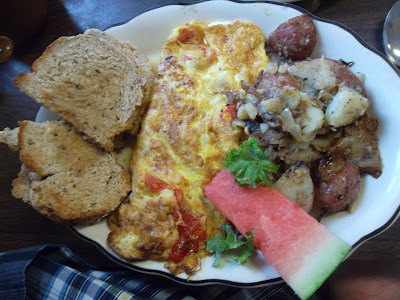 They also advertised lobster bakes, and that sounded really fun.

We were really glad to try a new place thanks to the suggestion of my friend Elizabeth and her bearded fellow. It was also nice to have a leisurely drive in the country on the way to a lovely brunch as we pretty much officially shift right into autumn.
Albany restaurants bread breakfast brunch restaurant reviews