By MsGarlic - February 21, 2012
As part of Tuesdays with Dorie using the book Baking with Julia, I made the chocolate truffle tartlets. Check out the full recipe here. I am going to start out by saying I did not find this recipe easy. I do feel like I knew a thing or two about pie crust, but I also learned more in trying this recipe (you've got to be careful and don't overwork it or force it too much!). One thing I have really enjoyed about this exercise it that I am encouraged to try recipes I might not normally try. But not only were these tartlets very laborious, but also expensive if you go for the Ghirardelli chocolate and if you buy the biscotti. They are also incredibly rich for regular consumption - but I think for a dinner party these would be amazing. If you had people coming over, it probably wouldn't matter so much about expensive ingredients or time consuming cooking techniques.

First, the dough! Dutch process cocoa powder, flour, sugar, and salt in a food processor, then chopped up pieces of cold butter and ice water. You just get to the point where it is crumbly, then pat it out with the heel of your hand with some pressure. 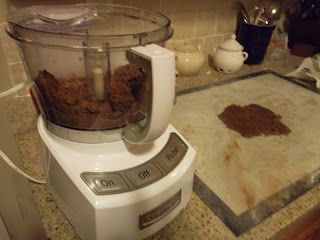 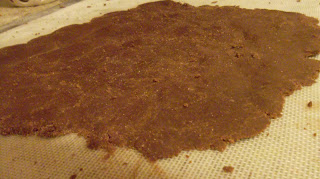 Then pat into a rectangle and chill. 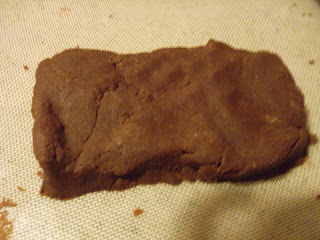 You cut them into equal slices and work with one at a time while the rest stay cold in the fridge. 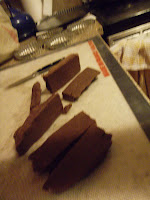 Roll each into a thin circle, and fit them in the tartlet pans (I bought mine at the King Arthur Flour shop when I took a pizza making class up there). I know enough about pie crust not to force it into the pan. I think you really need to just lower it in, and not pull it at all. There was much discussion here as to why the recipe asks to remove the bottoms of the pans. I did this and it worked fine. I think also if you have any problems that you should ball it back up and chill that piece of dough again. I think once it goes too wrong it can't really be fixed unless it is chilled again. 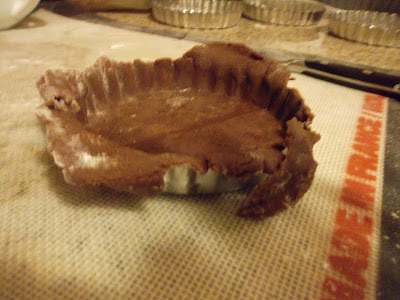 For the biscotti, I considered making my own, but it just didn't seem worth it for just a few of them. Also, if you have tarts in the house you don't also want tons of biscotti. So I went with caramel macchiato biscotti I bought individually at a Starbucks. 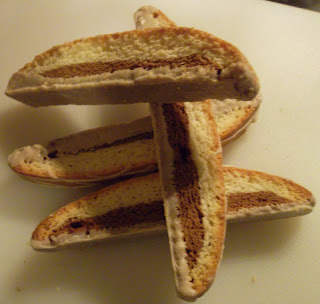 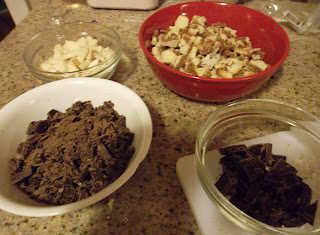 After you finish baking your tart pans, you can move on to making the filling. 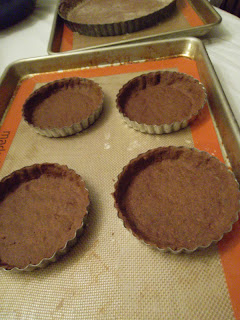 This is quite a luxurious custard filling with chunks of of chocolate and biscotti bits in it. Start with melting butter with the bittersweet chocolate in a bowl set over a saucepan of boiling water. 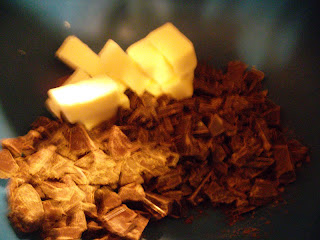 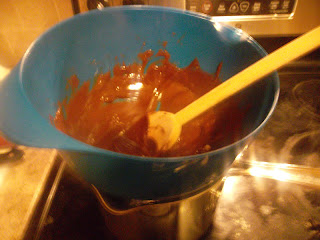 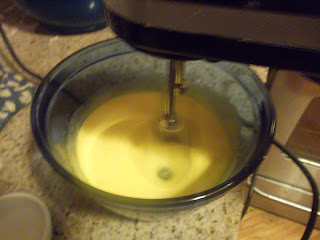 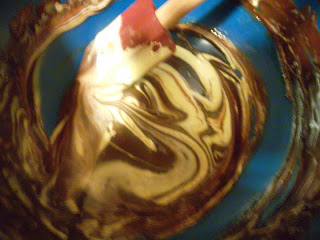 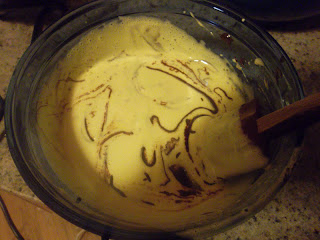 Fold in the crunchy ingredients. 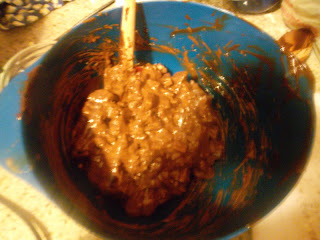 Then after you spread the filling in your tart crusts, and bake them you've got these lovely, luxurious, over the top desserts. 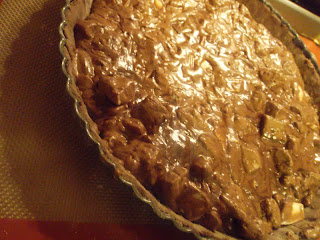 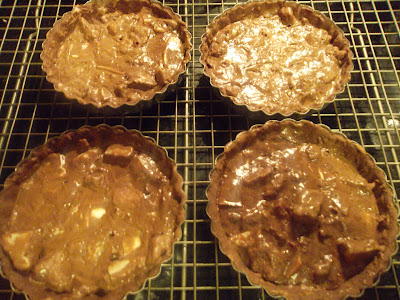 Very delicious! As I said, also laborious and incredibly rich - but for company this would be a great recipe! I thought they also had a nice flavor the next day. Check out all the other bakers' tartlets here!
chocolate dessert desserts Tuesdays with Dorie