By MsGarlic - January 14, 2012
So I am out here dogsitting, where the kitchen is mostly supplied for making things out of mixes. I've eaten a lot of salads from the salad bar at the local Stop & Shop (there should be more salad bars in the world - in offices, and schools), but I really miss my kitchen, I gotta say.

I've eaten things this week I wouldn't normally buy or eat (my friend once told me that bad food doesn't count if you didn't actually buy it yourself). I don't think of myself as a snob. I'm also not crazy about calories or anything but I usually think you can have anything you want if you make it yourself. Like ice cream - it takes a while to make it yourself and you don't want to eat it all at once because it took a lot of effort to make. I do feel like some people my age wouldn't normally eat junk food or low brow foods, but if you change one thing like make the hot dogs out of Wagyu beef all of a sudden it is gourmet and acceptable to eat . One thing I thought this week, was why can't we just eat what we want because we feel like it and because it sounds fun once in a while? Like my coworker had Price Chopper brand ice cream sandwiches. Would I ever buy them? No, but they turn out to be delicious. The cookie part is really soft, and the ice cream part almost seems a little more like a soft serve texture. Also, onion rings. I wouldn't normally eat these at home, but why can't I eat onion rings for lunch? Add ranch dressing and BBQ sauce and it is a lunch worthy of a five year old. I actually thought this frozen Alexia brand of onion rings was pretty good. You bake them on a baking sheet in the oven (I have to admit that I actually bought these myself).

That being said, we all know Paula Deen is ridiculous. I am watching her on the Food network right now and she is making this Pizza Dip. What's gross about it to me is that they are melting butter, putting in three different kinds of fatty meat, and then adding two packages of cream cheese. Ugh! Here I thought cream cheese was just for bagels. Then, her and her friend got out a frozen pizza dough from the grocery store, rolled it out, and wouldn't stop talking about how much it looked homemade. Look, I know I am unique in making bread so often, but it is really so easy. You put a few ingredients in the food processor, you can even make it the night before - it is way easier than people think. But the thing is - that is fine they want to buy dough from the store, I won't judge them, but don't make a big deal out of saying how it looks homemade. I think when they sliced up the dough Paula's friend said "We are basically making a store-bought product into something homemade!" What? That doesn't even make any sense. If I make crescent rolls into a veggie pizza is that homemade? No, that is assembling premade products. Ok, now Paula and her friend are making "tiramisu" and they added a pound of cream cheese to heavy whipping cream. Call me crazy, but I didn't know you could make an appetizer, dinner, and dessert all for the same meal that all used two packages of cream cheese each. She's just made one meal with 6 packages of cream cheese! Where does this tradition come from?

So I guess I say about this that I am not obsessed with calories, diets, and constantly trying to lose weight. But of course you should try to eat vegetables and eat balanced portions. Of course I wish Paula Deen well, but if one day she has a heart attack do you really think anyone will continue to buy her books and watch her shows? Sorry, but her and her friend who I just watched on the show are probably technically overweight. I know the idea with French food is that it is rich but you are supposed to eat small portions,  but do we think any of the people in Paula's cohort in the south eat small portions? I doubt it.

Anyways, I guess I have appreciated being out here how much eating well at home really requires a whole lifestyle. At our house we have a lot of cookbooks, a well organized kitchen, a food processor, and a pot rack so everything we need is right at our finger tips. Eating well at home requires a lot of effort, thought, and some commitment or enthusiasm. Otherwise you end up with crackers, canned soup, and ice cream. This isn't the first house I have been in in my life that has that grouping of processed foods. In fact, I bet there are millions of households like this throughout this country. There's only a Keurig machine too, which my coworker's son left here, and which is actually a step up from the instant coffee that was the only choice last time I was here.

I feel the way that you eat can really change your life. There are the taste, health, economic, and social aspects of course. But there is also some connection to your food you feel when you cook everything yourself that you don't get from opening a bag of something frozen or a can of something that goes in the microwave. I probably just miss my house. And also the city of Albany. 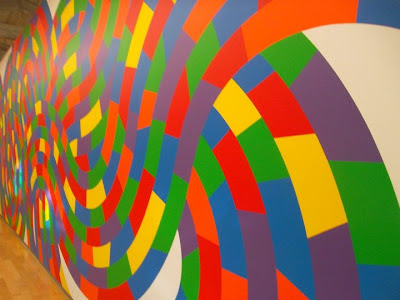 Every year at the museum where I work we take the interns on a field trip. Last year we went to Boston. This year we went down to Chester, CT to see Sol LeWitt's house, studio, and warehouse. We also had a fabulous lunch.


LeWitt is great. I loved an exhibit of his work I saw on the roof garden at the Met in NYC in 2005. I loved the one at the Wadsworth Atheneum. I even made LeWitt cookies which depicted the one we have at my work. And I am sure we all love the installation that we be at MassMoca through 2033. He has a way of cheering up dreary spaces and making you think about the ways lines and shapes connect. His pieces make me feel inspired, like a deep breath of cold, fresh air.  It was really a great experience. We arrived at his house, and saw that he has a variety of very interesting outdoor sculpture around the grounds of a regular looking colonial style house in a normal looking neighborhood. Then we went inside. Every room was painted a different bright color on the wall.…
Read more 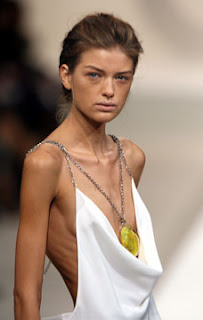 "Somewhere between emaciation and obesity lies good health. And somewhere between those extremes there is also a definition of beauty that is inclusive, sound, and honest."-Robin Givhan

My experience as a bride was marked with questioning the wide array of expectations associated with the experience. I was very against going on any kind of crazy diet.  What I didn't anticipate is that when you are super busy and slightly nervous you do happen to eat less and you can't help it. After the wedding I couldn't help but think that there was nothing more relaxing than not planning a wedding. Funny enough, I also found myself much more perceptive of food smells and felt much more excited about all the treats we normally have laying around in the office (pastries!truffles!) that I didn't even have time to notice while thinking about tablescapes and place cards (even as I tried to not be the person who cared much about those types of things). For the couple wee…
Read more